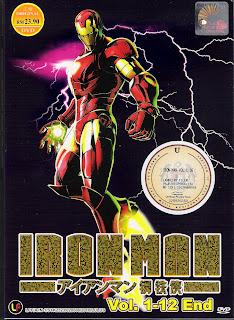 This 12 episodes only Iron Man anime is clearly a class above the other animated Marvels and D.C. series. The animation is so fluid that it is a delight to watch. The storyline is also good. That it is an anime and is Japanese in nature is clear. The dialogue is in Japanese so I was only able to understand by the subtitles only. The translation too is well done.

Iron Man (アイアンマン, Aian Man?) is the first show of the series with 12 episodes. The series was directed by Yuzo Sato with Warren Ellis writing the story. A special preview ran on Animax on September 25, 2010, before the series began airing on October 1, 2010, and ended on December 17, 2010.

Tony Stark goes to Japan to produce a new arc station and showcase the Iron Man Dio, a new prototype armor, that will replace him when he retires. However, the Dio goes out of control and it is up to Tony as Iron Man to stop it along with an organization called the Zodiac. 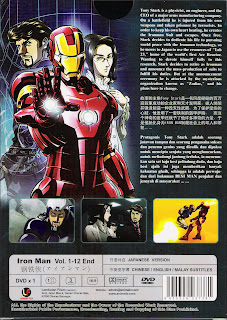 Marvel Anime is a four-part anime project with collaborations from both Marvel Entertainment and Madhouse. The project will take famous Marvel characters and reintroduce them for a Japanese audience in a 12-part series. The announcement was confirmed at the 2009 San Diego Comic-Con. The other two is Wolverine and the X-men and also take place in Japan. The fourth is still not announced yet.