The series of Manga bible stories by Ryo Azumi and Shinozawa Kelly gave me hours of interesting reading. More about them on their website NEXTmanga. It is close enough to the biblical text for our children to read. More like a modern illustrated bible. 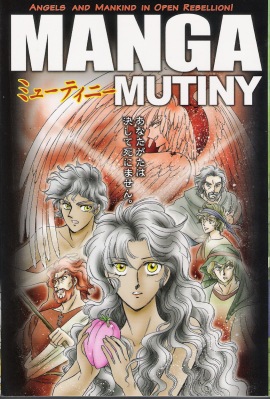 MANGA MUTINY is the story of the beginning, the creation of the world, the struggle in the heavens, the deception of humanity, and the corruption to follow. With the fall of man, the world becomes a hostile environment where no one can find rest. But new hope is born through one who believes…

MANGA MELECH continues the drama of Abraham’s descendants right where MUTINY leaves off. The people are a desperate band of wanderers. Homeless and weary in an unforgiving desert, they march toward a new land rich with green fields and abundant harvests.

MANGA MESSENGERS is the mind-bending drama of the kings and prophets of Israel. Continuing right where MELECH leaves off, the descendants of Abraham have not only found their peace in the land but have ascended to become the greatest kingdom in the world…

An unknown king enters the world under the cover of night to begin a seemingly unimpressive work. He soon becomes one of the most powerful figures in the land; intensely hated by some and emphatically loved by others. His work is unlike that of any king before or after him, and his words, strength, and life are unlike any the world has ever known.

At first bewildered after their leader’s departure, Yeshua’s followers quickly see there is little time for reflection as the forces of their enemies bear down hard and fast upon them. Every ounce of courage and strength is required as this newly endangered team holds on to their faith and to each other.