The Cult of Asclepius at Epidaurus

The Asklepieion of Epidauros or the Sanctuary of the god Ascelpius was one of the most important and revered Ascelpieia in the ancient world. It flourished as a place of worship and healing from the fifth century B.C. The major festival were the Great Asklepieia which were celebrated every 4 years, 9 days after the Isthmian Games. The worship of Asklepios (Ascelpius) only ended in 426 A.D. when it was outlawed by the Christian Emperor Theodosius II. 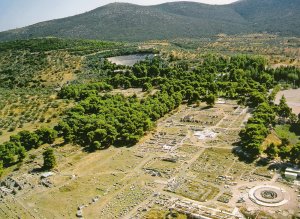 this is what remains of the Temple of Asklepios 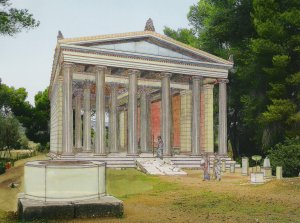 poster in the museum in Epidaurus

The god’s cure was based on the faith of the patient. After the ceremony of purification and the appropriate sacrifices made, the patient went to sleep in the precinct of the sanctuary. The god would appear to the patient personally or in the patient’s dream. He then gave instructions for the patient’s treatment. The therapy involved the epiphany of the god’s appearance as himself or in the form of his sacred creatures which include snakes and dogs.
Archaeological finds from the site include large numbers of surgical instruments indicating that the Sanctuary serves as a hospital and a place of healing.

Great Paintings from the Great Meoteron (3)

sanctification of the water 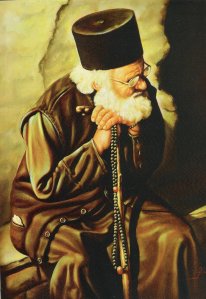 Great Paintings from the Great Meteoron (3)

Great Paintings from the Great Meteoron (2) 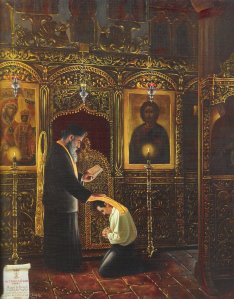 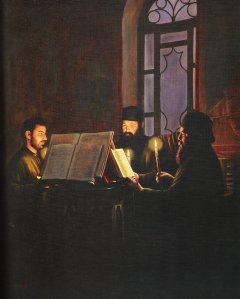 Great paintings from The Great Meteoron (1) 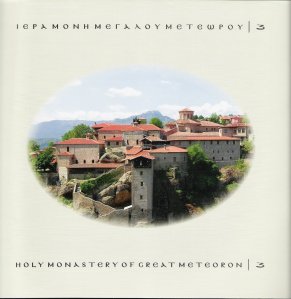 Kostas Adamos is a talented painter who painted his deep appreciation of the Greek Orthodox faith and tradition. His paintings are a reflection of this and is displayed in the Theological Galery of the Holy Monastery of the Great Metereon. 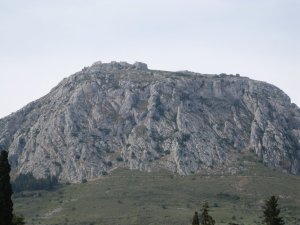 The Cybelen cult, named after Cybele, goddess of Asia Minor, was officially recognised by Rome in 200B.C. Its rites include sacred prostitution. Perhaps a form of this cult lowered the scruples of the Corinthian believers by leading them into temple prostitution ( 1 Cor. 6:12-20). The ruins on top of the hill is the acrocorinth. At one time, legend has it that its was home to one thousand prostitutes.

Here are two views of the acrocorinth from different parts of ancient Corinth. It is a long way and steep climb. Me wonders if the devotees of this cult, after climbing the hill will still have the stamina and energy to perform?

Like Loading...
Some photos of the Corinth canal. Imagine in the old days, they have to drag their ships across the isthmus on rollers 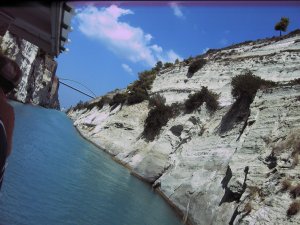 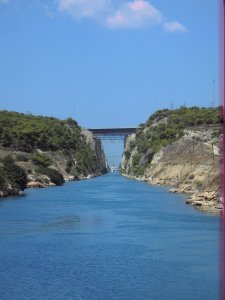 what am I doing? 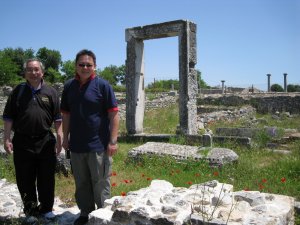 One may sympathize with Paul as he faced rejection and persecution in Philippi and Thessaloniki as Kar Yong has written in his post. We always assume that Christians are being persecuted because they refuse to worship the deified Caesars. That may be the case in Gentiles but not so for the Jews. The Jews were excepted from worshipping Caesar.
What possible reasons may there being for the violent reaction of the Jews toward Paul? Throughout Jewish history there have been many persons claiming to be the Messiah.
I suggest that this may be due to the Mithraic mystery cult. Remember there were many mystery cults around at that time and some of them were very powerful and influential. The Mithraic cult worship Mithra, a Persian god, during the first four centuries AD. Only men were admitted so it was very popular among the soldiers. Again we are reminded that many of the landowners of Philippi and Thessaloniki were former Roman legionnaires.
There are a number of similarities between this cult and Christianity that the Jews may be mistaken in thinking Paul was preaching a Mithraic-Messiah cult. Later, this cult became Christianity’s chief rival religion in the Roman era.