Some sobering statistics from Pastoral Care,Inc.

Like Loading...
In this interview, researcher Kara Powell makes an interesting observation. One of the reason we are losing our young people from attending church is due to our approach of age-segregation ministries. We separate people into ages-group activities when they are young and then expect them to attend church when they are older. Will age-segregation ministries goes the way of homogeneous unit principle? My mentor, Dr Allan Harkness, which researches in intergenerational ministries will be happy to hear this.

Is the Era of Age Segmentation Over?

A researcher argues that the future of youth ministry will require bringing the generations together.
An Interview with Kara Powell posted 9/18/2009

The statistics are grim. Rainer Research estimates that 70 percent of young people leave the church by age 22. Barna Group argues that the figure increases to 80 percent by age 30. The Southern Baptist Convention, America’s largest denomination, recently observed that growth in their churches is failing to keep up with the birth rate. Taken together, these findings suggest a startling fact: not only are we failing to attract younger worshipers, we’re not holding on to the ones we have.

As executive director of the Fuller Youth Institute at Fuller Theological Seminary and a former youth pastor, Kara Powell has her eyes on the youth drop out trend. She is currently in the midst of a three-year College Transition Project, a study that involves over 400 youth group graduates and is focused on understanding how parents, churches, and youth ministries can set students on a trajectory of lifelong faith and service. Though research is ongoing, it is already revealing a promising pattern: youth involved in intergenerational relationships in church are showing promise for stronger faith in high school and beyond.

Leadership editors Marshall Shelley and Brandon O’Brien spoke with Kara about her research and what it means for the local church.

Warren Bird, Ph.D., is Research Director at Leadership Network, and co-author of 21 books on various aspects of church health and innovation writes

Participants at this week’s Leadership Network-sponsored Ideation Experience began their 48 hours together by developing a “top 10” list of top kingdom ideas over the last decade. The original poll to help determine the list of nominees can be found here.

• Externally focused churches as key idea for evangelical churches
• Shifting opinions on social issues in the 18-35 year old demographic that are shaping the emphases of the church
• Multi-site churches
• The rise of networks as the key focus for church planting and resourcing in other ways
• Open source content freely given away for church resources via computer
• The rise of church websites/pastor blogs/podcasts and videocasts as church communication tools
• Social networking tools (facebook/twitter/myspace/custom tools) being utilized by churches and parachurch groups
• Bringing management and leadership focus into church in a fresh way
• Greater awareness by U.S. megachurches and others to international missions and humanitarian efforts around the world
• From “marketplace to ministry” as strong source of staff members of churches. Emphasis on “homegrown”
• Deeper penetration and shifts in small group models (life groups, cells, etc.) into a broad variety of churches

An enjoyable time of teaching a module for the Certificate of Child Studies for the Malaysia Baptist Theological Seminary at their Johor Bahru centre.

May God bless their ministries with children.

There have been many books on the history of Operation Mobilisation (OM) but this book is unique in that it was issued on the 50th anniversary of the organisation. Randall set out to tell of God’s faithfulness in the formation, ministries and sustaining of Operation Mobilisation International. It started with George Verwer‘s conversion as a teenager in New York. Today OM has its presence in over 100 countries with more than 5000 workers.

The book highlights the various ministries of OM; short term missions, evangelism, literature evangelism, ships and sharper of young lives. It is especially meaningful for me as it has influenced me when I was a young Christian and I am in contact with others who have also been influenced by the organisation. One of them now teaches in a Bible school in Kuala Lumpur while another is a missionary in China. There is an appendix at the end of the book which records ministries started by former OMers and also another list of books written by former OMers.

OM is truly a spiritual revolution involving a team of people dedicated to missions and in the saving of the lost. I strongly recommend this book to those who want to know more about OM.

Update: Thanks Andrew Jones for pointing out that it should be George Verwer instead of George Weaver (already corrected in the text).

Will the Real Ignatius Please Stand Up?
Ron Darwen SJ

On the 31st of July the Church celebrates the feast of St Ignatius of Loyola, one of the founding fathers of the Society of Jesus and its first Superior General…

Ignatius, I cannot help but feel, would have been enchanted to read those words. They seem to sum up for me who he really was: mystic and militant, or, as Nadal put it: a contemplative in action. A hundred years after Ignatius’s death, a Belgian Jesuit, suggesting an epitaph for his grave stone, grappled with the same notion. It is in Latin and not easy to translate, but I will have a go:

(Not to be daunted or held back by the greatest challenge and yet to be concerned with the nitty-gritty, that is the path to holiness.)

Ignatius had an uncanny feel for the big picture. He could see the wood for the trees and at the same time realised the importance of the trees. William Blake’s words could well have come from Ignatius: “if you would do good, you must do it in minute particulars”. Ignatius the man of vision, the man of order, could do both at once. That is what modern Jesuits still try to do.

God’s Call Waiting
Be faithful where you are while you wait for God’s call.
by John Ortberg,

I keep a small rock on my desk with a single word painted on it: naviget. I cherish that rock. My wife gave it to me during a spell that was dry for me and hard for us; when I felt like my past was crumbling and I was not sure what the future held. And if you don’t know Latin, keep reading; you’ll eventually find out what it means.

I first came across this word in a wonderful article by theologian Gilbert Meilander called “Divine Summons.” The article was about the notion of calling and vocation, which have long been vexing subjects for me, because I wondered if I would ever get one…

…Which brings me back to the article by Meilander. He writes about how Aeneas, in Virgil’s The Aeneid, has a divine summons to be the founder of Rome—”I am the man/whom heaven calls.” But building Rome is not what Aeneas wants to do. He is forced to give up his love and his attachment to the past.

For a calling is very different than a quest for fulfillment. A calling, though we glamorize it, is not glamorous. It is a response to a summons. It is a kind of surrender. It is a willingness to die to the past and move to the future. C.S. Lewis wrote, “To follow the vocation does not mean happiness, but once it has been heard, there is no happiness for those who do not follow.”

Aeneas does not want to leave his home to follow his calling; it means leaving old dreams and old loves. But there is a larger and better destiny to which he is called to submit. So Jupiter says of him, “That man should sail.”

And he does. Sailing means embracing the pain of leaving behind what he thought was his comfort and fulfillment. It means trusting that somehow he is not just moving into the future; he is being led. It is Abraham leaving Ur for he knows not what. It is Moses leaving Egypt for a land he will never enter. It is Jesus walking the Via Dolorosa toward a hill he does not want to climb.
“That man should sail.” It meant—a little like Jim Carrey in The Truman Show—it’s better to have the faith to embrace reality with all its pain than to cling to the false comfort of a painless fantasy. That life and growth and meaning can come only in the risk of obedience. The future—even if it’s hard—is better than nostalgia.

It meant that in leaving port there was something to sail to. It meant hope.
“That man should sail.” I did. I have. I am. The phrase in Virgil is a single Latin word written on the rock my wife gave me in love and trust. The word sits on my desk each day to remind me: Naviget.

John Ortberg is editor at large of Leadership and the pastor of Menlo Park Presbyterian Church in Menlo Park, California. 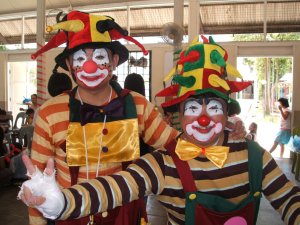 For those who are interested to be a clown for God, the Holy Light Church (Chinese) in Johor Bharu has started a clown, not clowning ministry. I like their motto

We don’t do clown, we deliver joy