This is a powerful article about prophetic preaching. I like what John Koessler has pointed out and I see the same faults in my own preaching.

The Mediating Prophet
Learning to be an advocate in the pulpit.
by John Koessler

Whenever we step into the pulpit, we are the advocate of the people who listen to us. We are a mediator of the text for them. Our role is to help them understand God’s Word.

Unfortunately, we can sometimes adopt an adversarial relationship with our hearers in our preaching. It’s not intentional, and it may come from a desire to preach prophetically, but some of us are more comfortable pronouncing woes than the gospel.

One of the bane of a medical doctor’s life is the after midnight calls. Apparently pastors have the same problem as Gordan MacDonald shares.

PASTOR’S ROLE
The 3:00 a.m. Phone Call
What makes a pastor a pastor?
by Gordon MacDonald

Remember that political ad in which the White House phone rings at 3 a.m. and someone has to answer? I know the experience. Sort of.

My phone call came late one afternoon. The caller, a church attendee I knew only casually, said he was at the hospital where his wife, Josie, was dying of cancer and might not last the night. Could I come right away?

Warren Bird, Ph.D., is Research Director at Leadership Network, and co-author of 21 books on various aspects of church health and innovation writes

Participants at this week’s Leadership Network-sponsored Ideation Experience began their 48 hours together by developing a “top 10” list of top kingdom ideas over the last decade. The original poll to help determine the list of nominees can be found here.

• Externally focused churches as key idea for evangelical churches
• Shifting opinions on social issues in the 18-35 year old demographic that are shaping the emphases of the church
• Multi-site churches
• The rise of networks as the key focus for church planting and resourcing in other ways
• Open source content freely given away for church resources via computer
• The rise of church websites/pastor blogs/podcasts and videocasts as church communication tools
• Social networking tools (facebook/twitter/myspace/custom tools) being utilized by churches and parachurch groups
• Bringing management and leadership focus into church in a fresh way
• Greater awareness by U.S. megachurches and others to international missions and humanitarian efforts around the world
• From “marketplace to ministry” as strong source of staff members of churches. Emphasis on “homegrown”
• Deeper penetration and shifts in small group models (life groups, cells, etc.) into a broad variety of churches

Like Loading...
Somehow we seen to teach less and less about sin and more and more about self-fulfillment in churches nowadays. So it is heartening to read an article about sin from John Ortberg, pastor of Menlo Park Presbyterian Church.

Do we ever get to stop fighting against the evil within?
John Ortberg | posted 6/29/2009

How much sin should we expect in the church? We have gauges for other elements of church life. We generally monitor attendance. We know how many people are in small groups. Somebody counts the offerings. And often we don’t just measure what we’re interested in—we set goals.

Anybody hear of a church that set a goal for a 5-percent sin reduction next year?

I don’t mean to be glib about this. Sin is, somehow, at the root of all human misery. Sin is what keeps us from God and from life. It is in the face of every battered woman, the cry of every neglected child, the despair of every addict, the death of every victim of every war.

Pastors have historically understood their primary battle to be not the battle to build a big church, but the battle against the power of sin. “We wrestle not against flesh and blood … .” Christians have measured the seriousness of the battle by the suffering and bleeding of Calvary.

And sin doesn’t seem to be going away, either outside or inside the church. So how should we be thinking about sin, in our congregations and in ourselves?

What You Need to Know about David Wilkerson’s ‘Urgent Message’
How people are responding to his warning of riots, fires, and economic collapse in NYC.
Ted Olsen | posted 3/16/2009 12:08PM

What did David Wilkerson say that got so many people talking?

I am compelled by the Holy Spirit to send out an urgent message to all on our mailing list, and to friends and to bishops we have met all over the world.

AN EARTH-SHATTERING CALAMITY IS ABOUT TO HAPPEN. IT IS GOING TO BE SO FRIGHTENING, WE ARE ALL GOING TO TREMBLE — EVEN THE GODLIEST AMONG US.

For ten years I have been warning about a thousand fires coming to New York City. It will engulf the whole megaplex, including areas of New Jersey and Connecticut. Major cities all across America will experience riots and blazing fires — such as we saw in Watts, Los Angeles, years ago.

There will be riots and fires in cities worldwide. There will be looting — including Times Square, New York City. What we are experiencing now is not a recession, not even a depression. We are under God’s wrath.

Yet despite the gorgeous locale and weather, there is, as usual, palpable angst here. The place is full of pastors who are either exhausted, burnt out, frustrated, or missional. They all amount to the same thing: a simmering anger about the church.

wow. Putting exhausted, burnt out, frustrated and missional in the same sentence. Does that mean what I think it mean?

For most pastors that anger is directed at stupid lay people, stubborn church boards, or indifferent church bureaucrats. But “the church,” and especially “the Western church” or “the American church,” is the object of a myriad of derisive and sarcastic comments.

The anger is understandable. Pastors are an idealistic lot, having entered the ministry because they had the mistaken idea that they could make a difference in the world. And the church is standing in their way. I know. I was once a pastor. It’s the way this works. I had great ideas for ministering to the community and the world. And all sorts of church people, from laity to church bureaucrats, got in the way. What I could have done in a church without people!

rural pastors are disappearing even faster than the general population, leaving graying congregations helpless in their time of greatest need. Trace Haythorn, president of the nonprofit Fund for Theological Education (FTE), says fewer than half the rural churches in the U.S. have a full-time seminary-trained pastor; in parts of the Midwest, the figure drops to 1 in 5. “It’s a religious crisis, for sure,” says Daniel Wolpert, pastor of First Presbyterian in Crookston, Minn., and a partner with the FTE, which supports young ministers and religious teachers. “And to the extent that these churches are anchoring institutions, it’s a crisis of community.” The sign for one lovely wood-framed church in nearby Buxton, N.D., says it all: GRUE LUTHERAN CHURCH. FOUNDED SINCE 1879. PASTOR–and then a blank where a name should be.

Comments from Christianity Today blog, Out of Ur, The Hansen Report

Vanishing Pastors on the Prairie 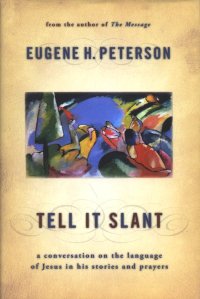 Eugene Peterson Discusses His Book “Tell It Slant”On the importance of paying attention to language. An interview from PreachingToday.com

PreachingToday.com: What does Tell It Slant say to preachers about their lives outside of the pulpit—about their soul and their relationships—and how that complements their preaching?

Eugene Peterson: The book tells preachers they’ve got to learn the language of their congregation. They’ve got to be as comfortable talking to people in the parking lot or in a diner with a cup of coffee as they are from the pulpit. This is a big overgeneralization, but pastors tend to want to talk about what they want to talk about. We’re not good listeners. If somebody asks us a question about theology, we can do that. If they ask us a question about Scripture, we can do that. But many of us are always trying to get a foothold so we can make a witness, make a point, make a conversion. Jesus didn’t do that, and I don’t think we should. We are trying to enter into the life of a congregation, listen to them, pay attention to them. Pastors by and large aren’t good at being silent.

The book looks at the nature of language as it comes through in Jesus’ stories and prayers. It pays attention to something that’s basic and large in Jesus’ life but isn’t given much credence in ours. We pastors are not conversational people. We know too much, and we’re too impatient to get that knowledge to others.

How does Tell it Slant speak to preachers about their lives in the pulpit, when they actually are doing the talking?

It encourages us to use imaginative language. There’s an overload of explanatory speech, doctrinal speech, apologetic speech in the pulpit. Much of our Christian language is dominated by proclamation and explanation, information and definition. When we read the Scriptures, it’s astonishing how little of that kind of talk there is. The writers are poets, they’re singers, they’re pray-ers. They use metaphor extravagantly. They use stories, these parabolic or off-the-target stories. I always had a few people in my congregation who wanted me to tell them in the sermons what they should do, and I would sometimes say to them, “Well, I just did. Didn’t you get it? I want you to participate in the story, in the metaphor.” But they want explanations, they want directions. Jesus did very little of that.

I think so, yes, although I don’t want to dismiss the importance of the kerygma and the didache. Those have prominent places in our tradition, but I do think things should be much more conversational. Part of this has to do with the culture in which we live, this so-called postmodern culture. Conversation is for people who are disaffected from formal, institutional religion. They are also disaffected from kerygmatic and didactic speech—but not from conversation. They love talking, and they love having somebody listen to them. And so there’s a cultural appropriateness to this now.

Scot McKnight of the Jesus Creed posted an interesting comment on his blog concerning what pastors are writing on their church website.

What annoyed me about these sites was the utter absence of a sense of the sacred
in pastoring, of the overwhelming sense of God’s call upon a life that reaches
so deep that everything becomes holy, of the profound respect and privilege of
the call to lead God’s people, and of the total lack of order. The sense we hear
today of being real and authentic doesn’t mean we devalue the pastoral calling
of its sanctity. I couldn’t and wouldn’t call any of these folks “Reverend.” If
I were a visitor, I’d go somewhere else.